Well, our last Winter Study has come to a close. I won't lie and say it was my favorite class ever, but it was fun and I got some really beautiful quilts out of it. The following is my technique sampler, done mostly by hand to get the hang of quilting. 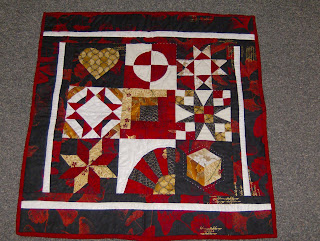 Who's surprised that I chose dramatic Asian fabrics? I'm not. I think it's absolutely gorgeous. Even though I won't be pursuing quilting, I'm glad I gave it a try. The next one is my big independent project, done in the Native Rainbow pattern. The color selection was from Walker's suggestion of dark greens and purples that I expanded to a general bruise color scheme. It's not quite bed size, which is a little sad, but it will make a very nice throw. 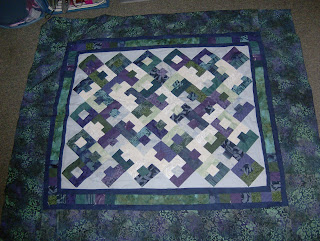 So after quilting class ended, we has us a very relaxing Dead Week,but was it productive? No. But I did get a bunch of knitting done, including one of the mint-green socks, pictured below. 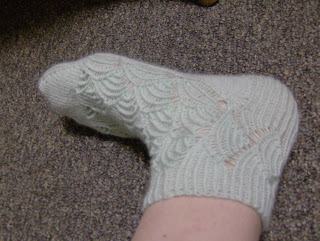 And here's a closeup of the scales. 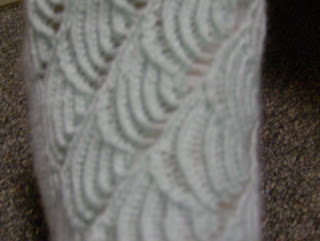 Cool, huh? They'll make a neat addition to my sock drawer, once I knit the other one, anyway. And, as per tradition, I started a pair of socks for Walker with that nice yarn Christina and I got in Adams last week. The yarn is a lot smaller than last year's yarn so I only finished one sock and am I about halfway through the other one: 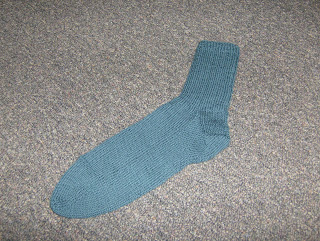 Man, boys have such big feet! Eleven inches is a lot of foot to knit and, oh goody, I get to do the same thing on the other sock. That's the trouble with socks--no matter how accomplished you feel by completing one of them, your jubilation is overshadowed by the fact that you have to make the other one, too. Oh well, he'll have some really nice merino socks once I'm done.

I do need to ease up on the knitting for the next few days anyway, since I'm taking the LSAT this weekend. Yuck. I've been studying and I'm a little more confident than I was last time, but you never know and I could get screwed. We'll see. And on top of that, classes start tomorrow, so that pesky reading should start eating into my knitting time. *sigh* So many projects, so little time. Once these two pairs are finished, I want to start on the Bella Paquita sweater and finally use up that yarn that Mary gave me. And then I can dig into that self-striping yarn that I also bought in Adams. Geez, I really do have too many projects. At least I'll never be bored, right?

*sigh*
The last Winter Study of my Williams' career is about to come to a close and then a nice, peaceful Dead Week, where I'll have plenty of time to work on this stash busting and studying for the LSATs, since that Feb. 2nd date is starting to look far too close.
Quilting turned out to be far more stressful than I thought it would be--it's a lot to accomplish in 3 weeks, but it looks like I will accomplish it by the end of this week. Or die trying. I don't think it's a hobby I'm going to carry on after this class. Knitting is my calling, after all. I will, however, provide pictures of those quilts once/if they're finished, which should be some time this week.
I spent last weekend housesitting for the knitting instructor's neurotic dogs--that was a chore. At least she paid me well for it and I had time to make this charming fellow: 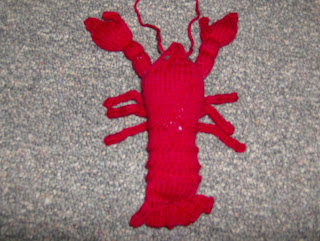 According to the pattern, his name is Francois. Funny name for a Maine lobster, but I think I'll keep it. Here's another view: 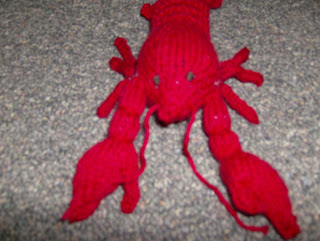 I also have not been true to the 'no buying yarn before you finish what you've got' dictum, since I went with Christina to a rather overpriced yarn store in Adams, that I don't think we'll be revisiting, and bought some really nice sock yarn for Walker and some not-so-nice, but self-striping sock yarn for me =). So many projects. Now I'm really not allowed to buy any more yarn until all of this stuff is used up. Okay?
I have been working on the rest of the yarn in my stash, though. That odd ball of kid mohair that I used for those socks earlier in the year is being turned into a really loose and lacy scarf for my mother. 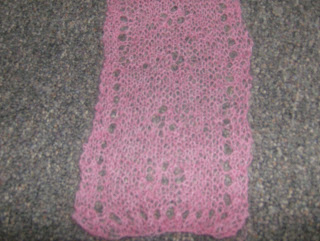 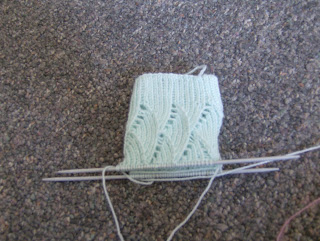 Looks like fish scales, doesn't it? So cool. I'd say it's been a fairly productive and satisfactory Winter Study. The only thing I would change is the amount of snow we had. It keeps flurrying and not sticking and it makes me very sad. We had so much in December and now it's all gone. What's that about? Oh well, good thing we weren't planning on going skiing this year.
Cheers,
-Allie

What a productive week it's been! What with trips to the gym and studying the LSAT, I've still managed to maintain a strong relationship with my crafty side. We've nearly finished our techniques samplers in quilting class--pictures will follow once it's finished--and then we get to start on our much larger independent projects. I'm excited! They're going to be pretty.
I have also found plenty of time to try and kill my yarn stash, starting with this entrlac hat for Ms. Sunmi. 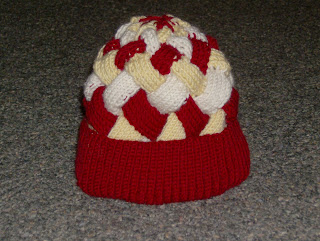 Jolie, non? Well, Sunmi tells me she likes it anyway. I've also finally completed the pair of mittens for Ms. Christina. It took a while with the felting and the decorating and sewing in the cuffs, but they're done! 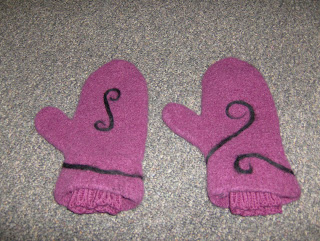 I'm really pleased with the design since I didn't put one on the pair I made last year. Christina will just have to be carful that she doesn't accidentally pull it out--it's rather fragile.

Next on the agenda are some little Valentine's Day gifts for certain people...you know who you are. And maybe I'll try using up some more yarn with a stuffed lobster and some mint green socks. I just love Winter Study =)

Wow, I haven't posted in a while. Sorry about that. I have gotten a lot done since I last posted, too. I finished the lace bodice sweater, which is gorgeous =) 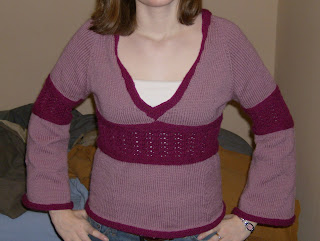 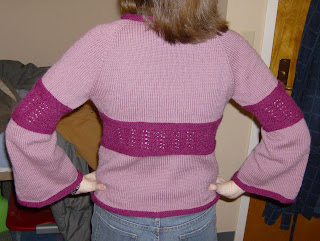 I didn't even have to make too many changes to the pattern. I just followed the 'small' instructions, except adding a few inches to the hip portion, and it fits me very nicely =).

After this I resolved that I wouldn't buy any more yarn until I'd used up the leftover stuff I already had. That was until I started helping out with the knitting winter study class and the instructor offered me all kinds of free yarn that had been donated to her. How could I refuse an offer like that? So I took one ball and started working on these felted mittens: 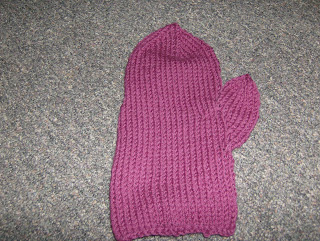 And just for scale, pre-felting: 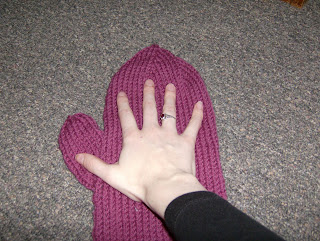 Once I finish the second one, they'll get thrown into a hot washing machine and shrink to normal hand size. Then I'll make them some cuffs and maybe put a pretty design on them and hand them off to Christina. Yay! After these mittens, regardless of how much yarn I pilfer from Mary, I'm still going to try to use up some of my stash, starting with an attempt at entrelac. Wish me luck with that...

It's going to be a very busy Winter Study, what with all the knitting, quilting class, and studying for the LSATs. Good thing I like being busy...