Lots of changes to announce in this week's post!

Walker and I have decided not to move.  We decided it was much more prudent for us to stay here another year, while he starts an account MBA at the local university and I can shop around career-wise.  I've already been talking to an art historian and a couple of bankers, so I have some hope that by the end of this year, I'll have a little more direction.  I don't think the South would suit me very well, anyway.

I was, however, really looking forward to a move, you know packing, unpacking, decorating, etc.  So the reason this post was delayed is that Walker and I spent last week looking for potential new places in the Greater Portland area to live.  You should have seen some of these places!  They looked cute on the outside, but were more like dollhouses. Either the ceilings were too low or the layout was completely absurd.  In one house, the door frames came down to Walker's nose. Sigh. Unfortunately I don't have any pictures for you, so you'll just have to use your imagination.

Turns out that, in our price range, we already found the best place to live.  Sure, we've got weird neighbors and there's not much light, but the floor plan is excellent and the location is very convenient.  We already have free storage at my parents' house, so we're just going to renew our lease for another year.  To make up for the lack of move, though, Walker has given me permission to redecorate our apartment, so over the next few weeks, expect some posts about my decorating prowess (or lack thereof). ;-)

I finished the Que Sera Cardigan by Kristen Kapur (Knitty).  It was a bit of a rush, but I finished it in time for Walker's family's visit over Labor Day Weekend.  It was yarn that they bought me for my birthday and I wanted to show them the end result of their gift: 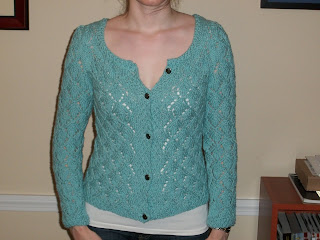 I really, really, really love it!  It's sooo comfy.  If you get the chance, try some Knit Picks Simply Cotton and you will thank yourself.  Unlike other organic cottons, it wasn't sticky and it doesn't sag.  It's just amazingly soft!  Really.  Try it.  The color I used for this cardigan was called "wave heather."  I've already got some more on the way for a baby gift for Walker's cousin--that's how awesome it is.

I really liked the design, too.  It's comfortable, beautiful, and fits really really well: 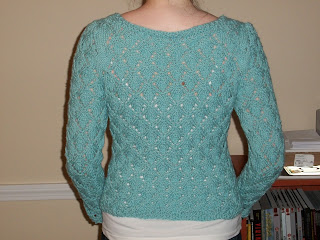 The pattern was super quick and easy.  It only took me about a week to knit--I know I'm not exactly a normal standard, but compare that to my Myrtle, which took about a month.  I didn't make any modifications to the pattern at all and knit it in the 34.25" size.  I also did not have to change my needle size to get gauge.  If I were to make it again, I would add two more buttons/buttonholes between my 2nd and 3rd buttons and 3rd and 4th buttons.  I have a lot of gapping going on when I wear it, which means I tend to tug at it during the day--distracting.  I may just add a couple of snaps on the inside of the buttons bands and that should do the trick.

This post is getting rather out of control, so I'll save the Mary Janes for next time, together with a little bit about my 30-day challenge at Hart Yoga, which I will be starting tonight!  More about that later this week!