Okay, enough already Winter.  I'm done with you.  This is the time of year when my giddy, childlike glee every time it snows fades through resentment into a near rage.  It's just too damn cold and I start feeling guilty about calling out of work for the third day in a row because I'm "nervous" about driving in the snow.  (Guilt, responsibility, same thing)

Really, my little front-wheel drive car and I can handle driving in the snow--it's all the other idiot drivers who can't.  They either disregard the reduced speed limit and cause a wreck or become paralyzed by fear and drive ~10mph.  Reasonable rate of speed?  What's that?  Parking's a nightmare and static electricity taking over my house.

To top it all off (if my yoga instructor is to be believed), winter is the season ruled by the liver--that toxin-riddled organ that fuels anxiety, resentment, and any number of negative feelings.  Super.   If Winter wore pants, I would give them a swift kick.

However, to combat the onset of anxiety, the cold does encourage such relaxing activities as hot yoga (if you haven't already, give it a try--my Plug here) and curling up on the couch with some knitting!  Here are two such products of my attempts to stay warm (and happy). 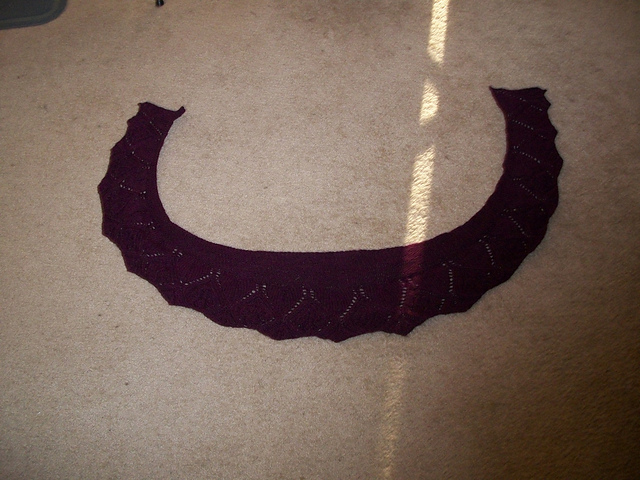 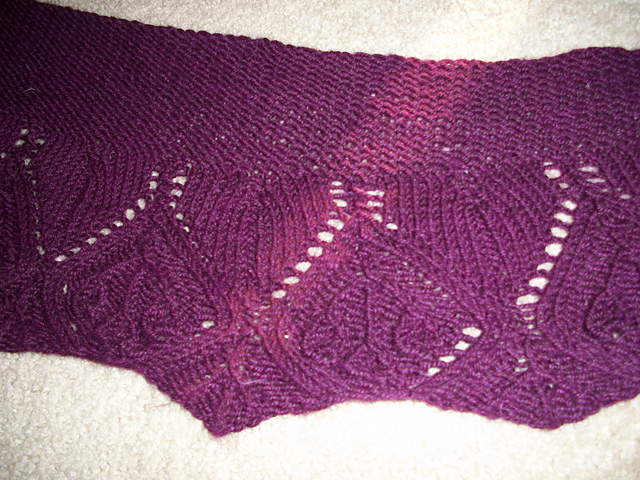 Here's a close-up of the pretty little berry pattern:
This thing is seriously ginormous.  I have to wrap it around my neck several times to keep it from dragging--which is absolutely perfect, given how bitter cold it's been lately.  I used Berocco Ultra Alpaca, which means it's soft and warm and very cuddly.  Great "beet root" color, too.

I didn't *quite* have enough to finish the pattern.  The whole thing is knit sideways, so you knit the lace section from the bottom edge up and then knit the rest in large, sloping "short" rows.  I only bought two skeins of the yarn, hoping this would be enough--not quite.  I had to cut out a couple of the "short" rows and just bind the thing off.  No harm done, though--it's huge anyway and no one can really tell part of the pattern is missing.  That'll be our little secret ;-)

I really wasn't sure I would like knitting a scarf lengthwise like this.  I thought I would get bored with the insanely long rows (I think 325sts at one point), but it was delightful not to have to knit so many mind-numbing rows.  Normally when I knit a scarf I get tired of the pattern after the 3rd or 4th repeat and resent it for the rest of the project.  For Hawthorne, yes the rows were long, but I only had to go through the pattern once.  I will definitely be knitting another scarf in this fashion! 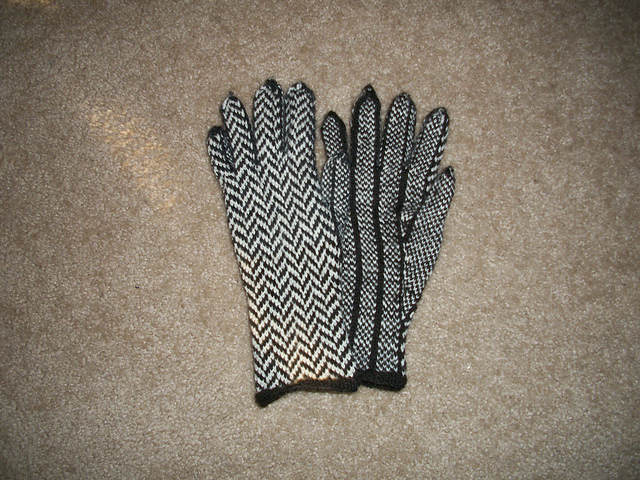 Boy, I am glad to be done with these.  This unfortunate project had the advantage of an awesome-looking FO, but were pretty dang unpleasant to knit.  Mostly I trying to both make a pair of gloves for each of my coats (one more left!) and use up some of my Palette stash.  Totally repetitive and did I mention that the pattern was written in Japanese?

I tried a number of web translators, but the results were all about an intelligible to me as the original Japanese.  So I knit these bad boys based on the numbers and the charts.  For the most part, my efforts paid off--they look nice and fit very well, but lacking instructions in decreasing the fingertips, mine look very long and pointy.   I suppose I could grow out my fingernails to fill them out, but that seems like a lot of effort for naught.  So long my fingertips are pointed away from me, like when I'm driving, I am very pleased with the results!  You couldn't pay me to knit these again, though.  Well, maybe more like you couldn't afford to pay me to knit these again.

Next time I probably will not have another FO for you.  The projects I currently have going are all pretty large and complicated.  Maybe I'll make some progress before then?  We'll see.

So no new projects today, just wondering in amazement at the 16.2 miles of yarn that I knit this year (crazy!)  I started the year with over 7 miles of yarn, which seems like a lot to have in the house, but considering how quickly I went through it, it's really not all that bad.  I closed 2010 with just under 2 miles of yarn--all but 400 yards (given away) of that knit into projects.
Now some of my favorite projects:
Throughout the year, I knit 9 pairs of mittens and gloves (0.9 miles) some highlights: 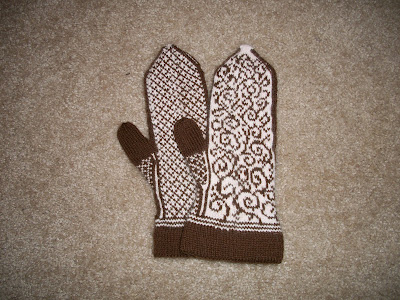 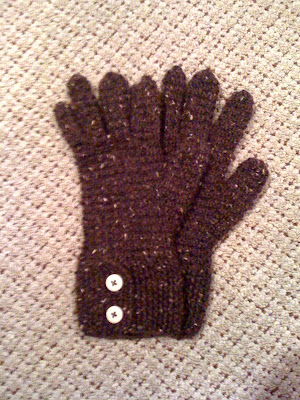 I finished a total of 6 pairs of socks/slippers (1.1 miles): 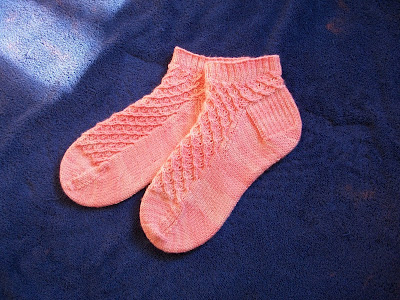 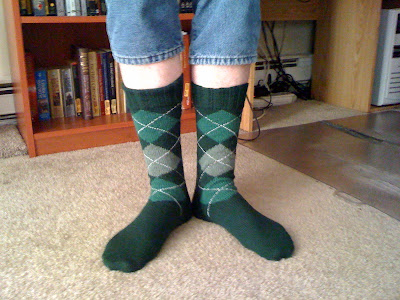 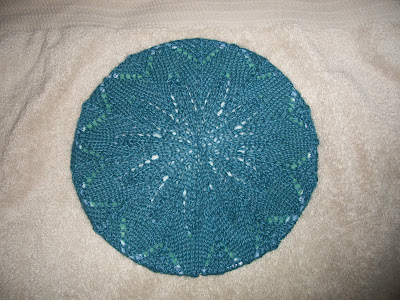 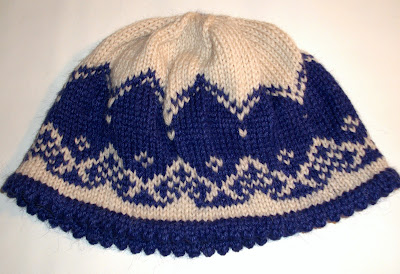 I﻿ knit a total of 4 scarves and shawls this year (0.77 miles) Shawls do not seem to be my favorite, but I sure love how this one came out: 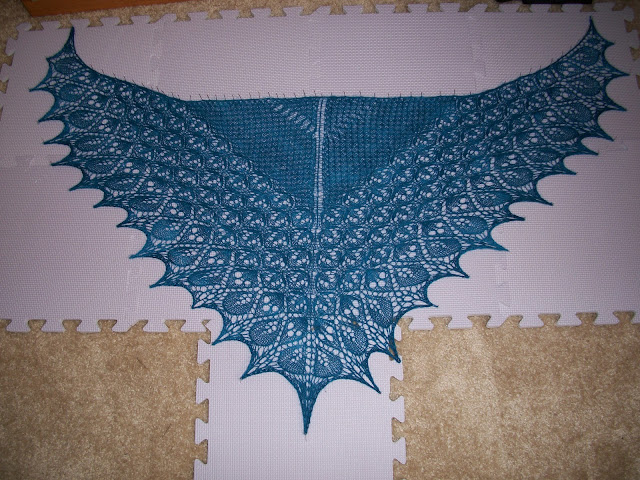 Since I opened the Etsy shop this year, my baby item production has skyrocketed.  I made a total of 22 baby items (hat/bootie sets counting as one item) for the shop and friends/family (1.4 miles) 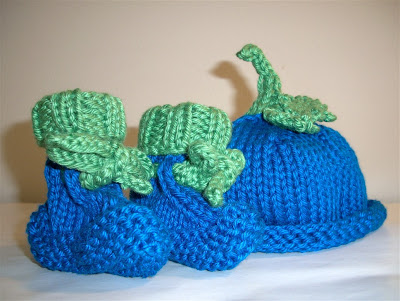 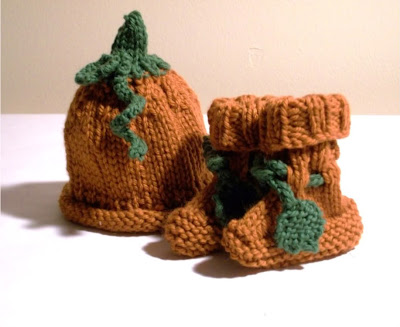 Christmas was pretty busy, too.  For some reason, I got it into my head that I needed to knit everyone a Christmas ornament and went through about half a mile doing it. 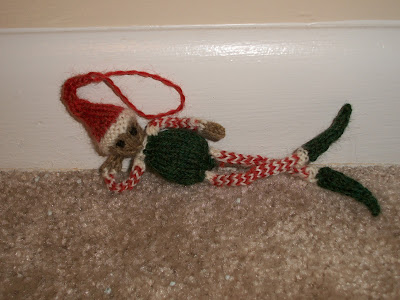 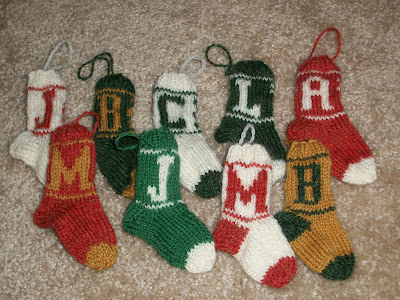 I don't seem to be much of a vest person, either, since I only got through 3 vests/sleeveless tops and one of them is sitting in the frog pond, waiting for some significant changes--maybe I'll get to that later this year.  I used about 1.2 miles of yarn on vests: 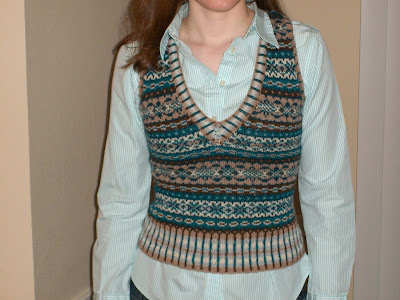 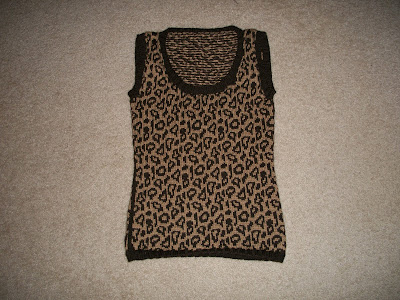 It must be said, however, that 2010 was clearly the year of the sweater.  I don't care what the Chinese Zodiac says.  I set a goal for myself to knit one sweater per month in 2010 and I succeeded with 14!  12 just for me and 2 for Christmas gifts!  I calculated the yardage and it came to an absurd 7.63 miles of yarn--that's how much I had in my stash at the beginning of the year!
The sweaters ranged from Autumn Rose, which took almost 1500 yards and 28 days: 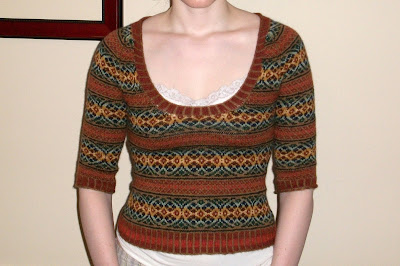 And the Cabled Cowl Neck Sweater, which took only 539 yards and 5 days: 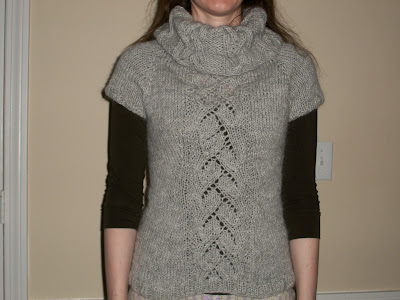 Yet I would have to say that my favorites for 2010 were Pas de Valse: 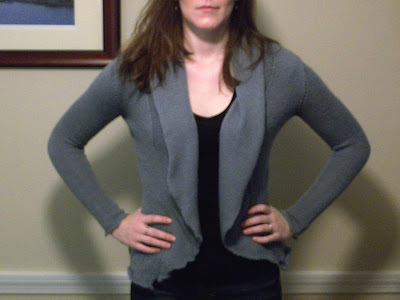 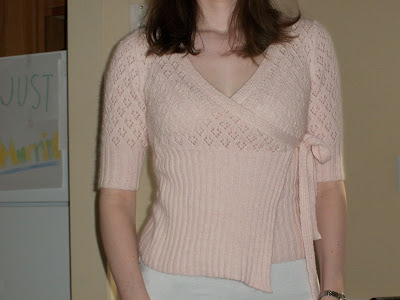 So many beautiful sweaters this year, so many great projects!
While there are a lot of sweaters I would like to knit, I don't think I will be making as many in 2011.  I think 2011 will be the year of the afghan.  With friends geting married, having babies, and the progress I've made on the scrappy leftovers blanket, I've got at least 3 afghans on my to-do list.
As far as resolutions go, I certainly can't say I want to knit MORE.  That would just be ridiculous.  I do want to get better at knitting continental, so that I can really increase my speed with stranded projects by knitting with both hands and maybe do more lace projects.  I'm slow at it, but I really love the finished products. Oh, and I want to finally have a wearable version of the Venezia Pullover.  This has just been going on for way too long.
What are your knitting/crafting resolutions this year?
Cheers,
-Allie
﻿
1 comments

The sweater I made for my mother turned into a bit of a slog--it was just a lot of tight stockinette and hoo boy, that collar took forever! 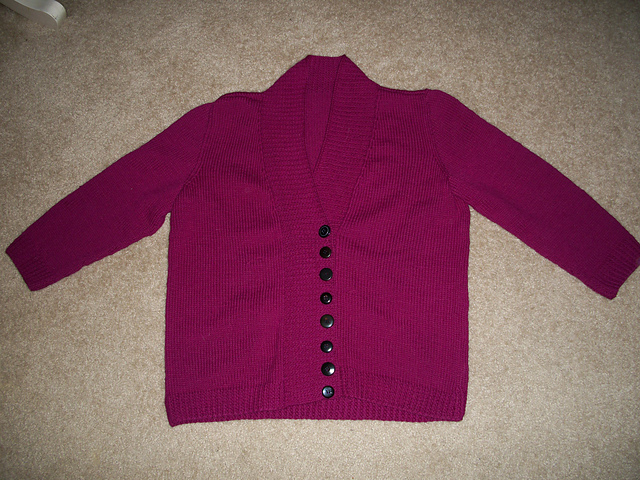 Sorry the picture isn't so great.  I didn't get one of  Mom modeling it but she tells me it fits well and that everyone was amazed when she told them I made it for her--guess I'm just that awesome.

The pattern is called Essential Cardigan by Laura Grutzcek and was featured in this summer's Interweave Knits.  Mom asked for a longer cardigan than the one pictured, so I increased the length by 3", which was super easy since there's no waist shaping at all.  It is a very elegant piece, but I don't think I would knit it again, especially on a deadline.  It just took too long and I was very bored.  Maybe if I had another, smaller project going at the same time, but probably not.  It just wasn't complicated enough for me :)

I did, however, like the yarn.  I used Knit Picks merino style, which is not washable, but softer (and cheaper) than its superwash counterpart.  It's a touch splitty, but once you have it blocked out and pressed, it is delightful.  Plus, I picked a pink color, so Mom had to love it!

Caroline's sweater was a lot quicker and easier (not just because Caroline is the size of a toothpick).

I won't even bother showing you the picture of mine--it's way too dark.  This is a picture from the pattern's page. Just picture mine in black (and on my sister): The pattern is called Safire by Hillary Smith Callis.  Way easy for a first sweater if you want a cropped cardigan.  It was just a basic raglan and I didn't have to make any changes to the pattern.  Nothing to be scared of.  I'm not even sure Caroline tried it on before she left for school, so I really hope she liked it...  It really was a pleasure to knit, though.  Quick, easy, mindless and Swish is always fun to knit.