The Cleopatra Wrap is finally finished and blocked! I am extremely pleased with the results and was pleasantly surprised with how well bamboo holds a shape after blocking. 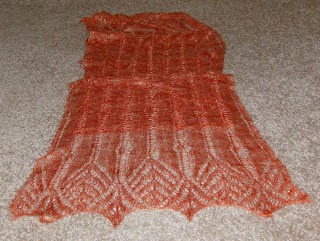 Those points came out rather nicely, don't you think? The finished measurements are 75" x 16", which is a lot more than I thought I would get out of one skein, but it'll make a lovely shawl when/if fall comes to Philly. 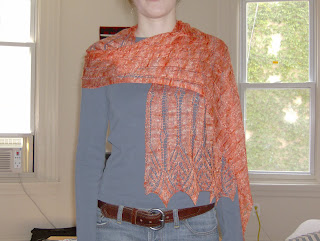 I'm not quite sure what I'll do with the other skein of bamboo yarn I bought when I was panicking about the length of this shawl. Maybe I'll turn it into the Clapotis Wrap, which will make a lovely shawl, but will be somewhat less taxing than Cleopatra. Maybe Miss Christina would like it as a transition piece into the lovely world of shawls?
I also took some pictures of me in the seed-cabled cardigan for your viewing pleasure: 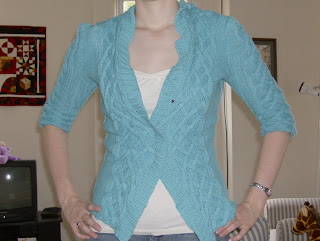 (That little black spot is actually a snap, since the pattern didn't allow for any closing device--it's not a bug or anything) And here it is from behind: 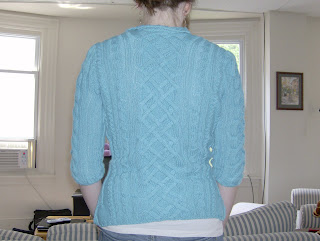 A few days ago I came to the conclusion that I no longer liked that wine-colored sweater I made back in December, so rather than waste the yarn, I took the thing apart and turned some of it into the Talia Vest: 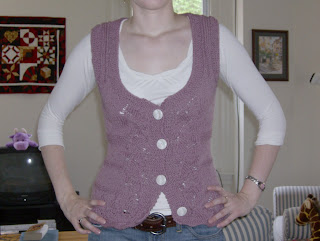 I'm not as keen as I thought I would be on the finished product. Perhaps part of it is because I couldn't find any silver-colored buttons and had to settle for white, but it still looks pretty good so I think I'll hang onto it for a while. It looks better from behind, in my opinion: 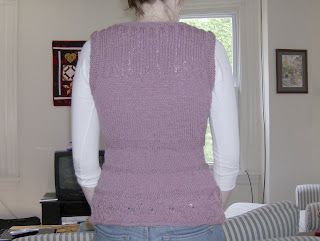 Hope you all have a wonderful end of summer!

Wow, it's been an awfully long time since I've updated this thing and so much has happened since then! For starters, I finished all my schoolwork (on time, I might add) and we all graduated June 2nd with much pomp and a slight hint of rain. They were so concerned it was going to downpour that they even gave us plastic baggies to put our diplomas in!
Of course I also finished all the graduation gifts I'd planned for the girls and they've all received them, but unfortunately, I am not able to locate the images I took of them. I really have no idea what I did with them. Perhaps they didn't make it to this new computer after the old one broke. (Yes, again.) So I don't have any pictures for you of those and you'll just have to imagine how pretty they were.
Then after graduation, Walker and i made the move to Philadelphia and are finally all settled in. Everything is put away and the stove (finally) works. There are still some things that need to get patched up around the place, but those are supposed to happen today. I am still unemployed and getting rather anxious about that. I did find a job, but that basically required me to waltz around Home depot and harass their customers about getting their cabinets refaced. It was awful and I quit that last week. Fortunately, however, I had an interview at a law firm on Monday for a paralegal position that would allow me to actually handle cases and not just run errands or do boring research. The woman seemed to like me and when I called her on Tuesday, she seemed optimistic about having me come in for a second interview sometime in the next couple of weeks. I really hope that works out because I would really love that job! Right now we're surviving on savings and Walker's job at the UPenn manuscript library, which is all the more reason for me to find a job and fast (which I promise I will do once I finish this post).

But back to knitting. Since I am unemployed right now, I've had some time to work on some knitting projects, like the seed cabled cardigan, which is pictured below. 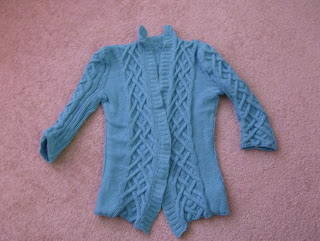 Even Walker tells me about how much he likes this one! I got the pattern out of the book Sensual Knits and used Knitpicks CotLin yarn, which is super-comfy! The only thing I changed (apart from the yarn) is the width of the ribbing on the front; I made it a little narrower and am very pleased with the outcome. Maybe I'll get a picture of it on me in a later post--my camera always seems to be on the fritz when I'm wearing it.
Because Walker's been so nice to me, I decided to reward him with another pair of socks, but I couldn't bear to make another boring forest green pair, so I made him some argyle socks! 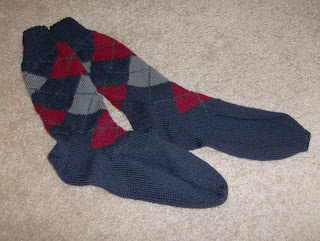 I got this pattern out of Mary's book Never Knit Your Man a Sweater until You've Got the Ring! and used Knitpicks' Essential sock yarn, which means these babies are not only more interesting, but also machine washable. The only thing I don't like was that the pattern was so complicated that it required me to knit the leg portion flat and seam it afterwards, which means there is a moderately uncomfortable seam at the heel of the sock, but Walker says he doesn't mind, so I guess it's okay.
So now all that's left in my knitting bag is the Cleopatra wrap and its yarn and a some red and blue yarn from those socks. I don't know what to do with those partial balls of fingering-wt yarn, so I think they'll just hang out until I make another fair-isle fingering-wt project. But I don't know what I'll be working on once/if I finish the Cleopatra wrap. I've only got about another 2 feet to put on the thing (I have 4 1/2) and it'll be finished. I've been thinking I want to make the Goddess Top by Stitch Diva Studios in a mulberry colored bamboo yarn. What do you guys think?
I should probably scoot off now and do some more job searching.
Cheers!
1 comments