It's picture time. I had a lot of time to knit while I was in GA, so here are a few completed projects:
First, I made a hat with some of the leftover blue mirasol yarn based on the blue mirasol pattern and added a flower. I kind of made up the pattern based on a few different ones. So I didn't really write it myself, just had a lot of inspiration. 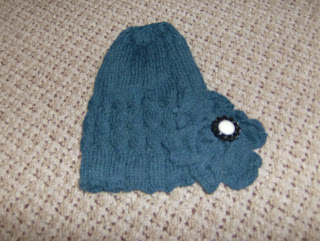 Cute, huh? I gave this one to Mary (Walker's sister) to match the gloves I made her (below) and she was excited that no one else she knows will have a similar hat. Yay, original handmade gifts! Speaking of which, the punkin hat is also completed: 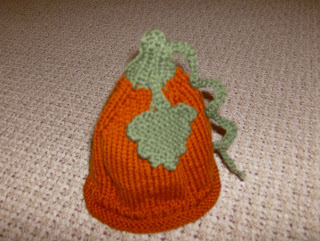 Awww. I didn't get to make this one in cotton as I would have liked because they didn't have a suitable orange, but it's in a washable merino from knitpicks, so that's almost as good. I'm going to ask my mother secretary to send me a picture of her little Charlie in the hat. If she does, I'll share it with you guys =) 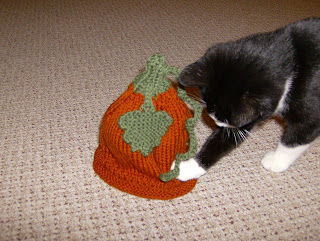 Jericho thought it was relevent to his interests as well. He's so helpful with picture-taking. =P
I also made little Charlie a froggy with the leftover yarn: 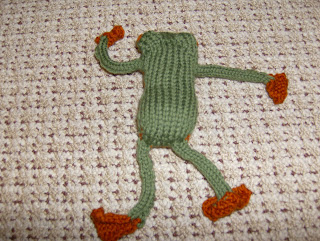 I thought about keeping it for Jericho, but he really has enough toys lying around our apartment, so I mailed it to Charlie with the hat.
Un/fortunately that Blue Mirasol hat wasn't enough to kill that yarn, so I made some gloves for Mary, using the Cable News Gloves pattern. They were fairly complicated--I had 7 needles going on them at once--but they came out nicely and fit her very well. 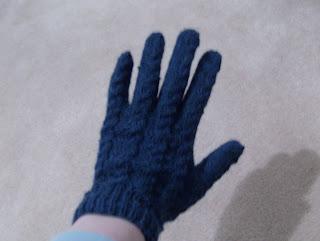 Now she'll be super-stylish and warm when she gets cold at the football game.

But I had SO much of that yarn leftover that even these gloves couldn't finish it off, so I'll be trying to make another of those Blue Mirasol hats for Walker's Mom so mom and daughter can match. Yay! And then I can finally get to that Stardust Cardigan, after all these little projects and after that yarn accidentally got shipped to Reno.

News on the job front: no word yet. I'm going to call them tomorrow and hopefully I'll get a favorable answer. Keep your fingers crossed!!