A lot's happened since my last post, both in knitting and in the rest of my life.
Firstly, Christmas happened. Everyone seemed to like their knit gifts very much. Here's a picture of the scarf I made for dad but forgot to photograph before I wrapped it: 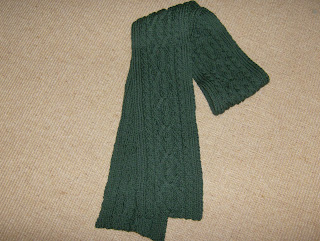 It looks nice, but the dye turned some of my needles green. :( It was worth it, though, and Christmas joys were more than enough to overshadow this drawback.
Walker came with me to Maine both to meet my extended family and for an interview with a staffing agency in Portland. Both events went very well: my family enjoyed meeting Walker very much and the staffing agency seems very confident that they should be able to find us something good, which brings me to the next major event. We're moving to Portland. Yay!
We've found a great apartment with brand new appliances about 10 minutes north of my parents and we're fairly confident that we've found someone to take our place in Philly, so (barring a major issue) we're leaving next Saturday! I'm so excited! It will be so nice to be in a place that feels safe and familiar and where we have a good chance of getting a job, hurray!
We'll also be in a convenient place for wedding plans, since it'll take place in Maine. We've got major things, like venues, band, and my dress (I'm going to wear my aunt's dress, which I might post once my mother gives me the pictures she took), but it'll be nice to be around to make the details. Oh, I feel happy again :)
So, knitting news: I had a lot of leftovers from Christmas presents and have been trying to use that up, creating the following projects.
Walker finally conceded that he needed a new pair of gloves, so I made him this fairly simple pair to keep his hands warm: 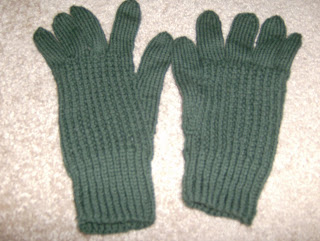 These didn't finish off that scarf yarn, though, so I made this cute little beret. I had intended it for Jericho, but he's still too little and it didn't fit him right. Maybe it'll fit my parents' cat instead. He's certainly large enough... 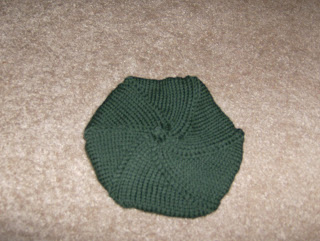 Even after this, I still had a little left over, so I combined it with some of the white cotton blend from Caroline's sweater (which she refused to model for a picture, stinker) to make this hat. I combined a basic roll-brim pattern I got online with a fair-isle pattern from a book. The pattern is called 'Alaska,' so that's what I'm calling the hat. It's a little too small for me, though. So if you know anyone with a smallish head who would like this hat, let me know or I'll just hang on to it. 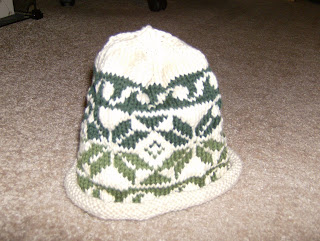 The hat finished off the green yarn, but I still had some white cotton left, so I made a little washcloth 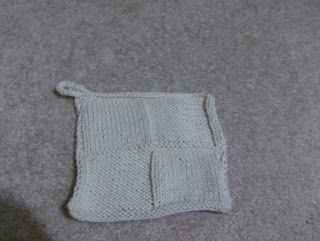 and a cat toy meant to look like a Chinese dumpling. I think there's only a vague resemblance, but Jericho likes it, so I guess it doesn't matter. 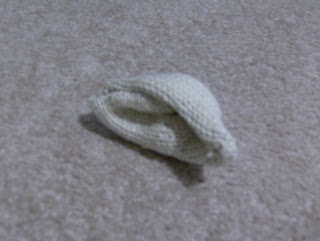 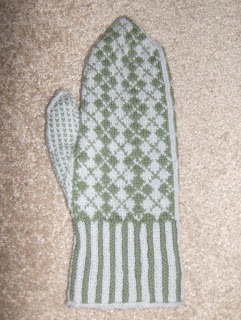 This one came out nicely, but took me forever (by my standards, anyway). I'm making them on size 1 needles, so they gauge is tiny! I'm going to make the other one and then work on projects with the new yarn I got today. After that I might figure out something to do with the rest of the fingering weight pile.
Next projects with the new yarn are going to be a lovely beret in teal knitpicks elegance (70% alpaca 30% silk), which is soooo soft! I can't help petting it!
I've also got some worsted weight wool to make Mom a scarf to match her gloves.
I've noticed that my posts are kind of getting out of control. I'm sorry about that--I'll try to update more in the future, but once I get a steady job, I might have fewer projects to report anyway.
Wish us luck in our big move! 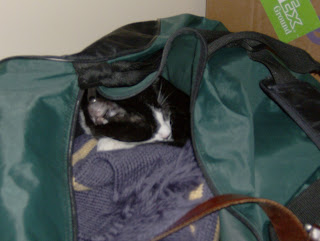