So, remember how I said I was going to give you a preview of this project?  Well, you're in luck today because I finished it over the weekend.  Yup, it's allll done, all 2184 yards of it (that's 1.25 miles!).  I will probably deliver it to the lucky mommy-to-be on Thursday.  So Vicki, if you're reading this, please avert your eyes until later this week!

I'd had this pattern in my queue for a while, but never had a good occasion to knit it before now.  What better occasion than a new baby with whom to share a "tree of life" pattern?  Here is the completed blanket: 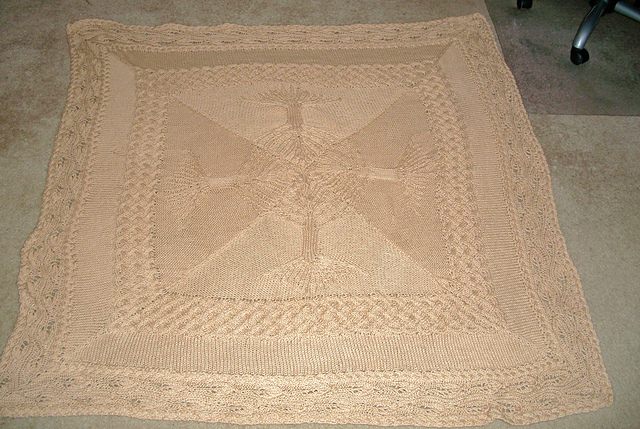 (Sorry for the crummy picture.  The finished blanket is about 58" square, so it was tough to get a good angle for a picture, plus fight naughty kitty off it)

Here is a better image of the center square: 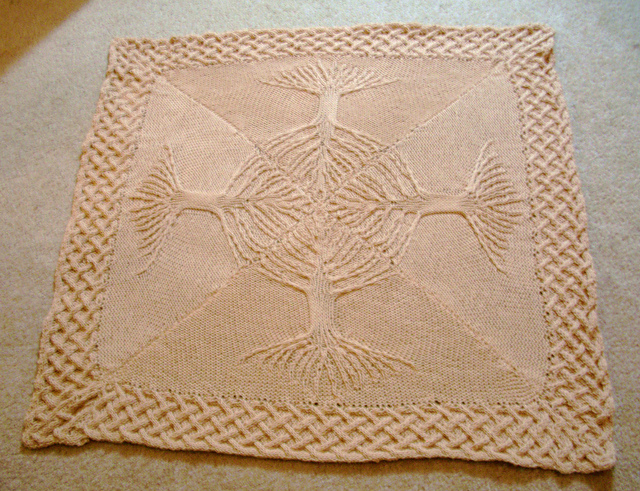 This one is truer to the right color, too.  The "tree" section was probably the most difficult because I had to be sure of where I left off in the chart, making certain that all the rows line up properly.  But the effort is worth it--the end result was inspired by the Norse myth of Yggdrasil, the Tree of Life, complete with tree, Celtic braid, and leaf border (larger picture).

The free download of the pattern by Linda Jacobs is available here for those ambitious enough to try it.  It's not especially hard, but requires some advanced techniques like cables, reading charts, grafting, picking up stitches, and working in the round.  It has a pretty cool construction--you start from the very center of the tree pattern, working in the round from the inside out.  Doable, but not great for "tv knitting."

By the end, I was starting to moan that it was taking too long (~6 weeks--hey, that's a lot for me!) and taking up too much space on the couch when I was working on it, but given that it required 2184 yards and is 58" square, that's not surprising.  And I didn't even knit the largest size!  I could have made it 74" square, but I thought ~5' was a good size for a toddler to grow into and treasure later in life.

My favorite part is that I used Knit Picks simply cotton, which is a deliciously soft completely organic undyed cotton.  It's machine washable and there no artificial ingredients whatsoever--perfect for a little yogini!  I don't think the entirely organic product is available anymore.  They do still have the organic cotton, but the dye for the heathers is artificial.  Still machine washable and wondrously soft, though.

So congratulations to Vicki!  I hope you and Little Violet get many years of love and joy out of this blankie!

Up 'til now, our cats have been pretty good about my knitting.  They generally don't harass me while I knit, they don't attack the yarn balls, and Branwen has had only one needle chewing incident.  Sure, Jericho used to dive into my knitting basket as soon as I walked away from it, but since he passed, we've been pretty incident free.  Until this weekend...

It all started with a string toy.

You know, those long strings of felt attached to plastic rods for teasing cats.  After his catnip mouse, this is Arty's favorite toy.  Unfortunately, he also has a tendency to inhale string like spaghetti, so we had to put it up, out of his sight and out of his reach. I don't have a picture of Arty's string swallowing--safety being the more important issue, but this is kind of what is looks like (except Arty is black).  Yes, the facial expression is accurate: 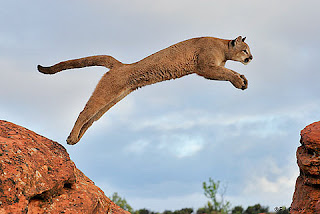 I order to prevent such scenes as this, we wound the string toy tightly and put it on top of a high book case in the living room, hoping that we would be able to reach it, but Goofy Kitty would not.  About a week ago Little Arty decided that he could and would not wait until regularly scheduled play time for access to this string toy.  He climbed up onto the arm chair and made a tremendous leap onto the top of the book case.  I think it must have looked something like this:


We found him the next morning, completely wrapped up in the string with a guilty look on his little face like "what?  I was being helpful and entertaining myself."  We immediately put the toy in the coat closet, where there is no chance he can get it.

I don't think Arty really understood what happened to his string toy because he suddenly became a lot more interested in jumping onto this bookcase.  There wasn't anything up there that he needed or wanted, but he continued to search for his lost toy...in the same place over and over.

Unfortunately for us, this is also where we (used to) keep our winter accessories--scarves, hats, mittens, etc.  We put them all in a big basket on top of this bookcase, so they would be out of sight of the cats, but not out of our reach.  I did not have enough foresight to realize that Arty was not going to stop jumping onto that bookcase and eventually something bad was going to happen.

I mean, just look at the mischief in his eyes:

One day, Arty gave up his quest for the string toy and opted instead to explore the contents of this basket.  He then found himself the finest, most complicated, most labor intensive project in there. And ATE it.

Can you guess what it was? 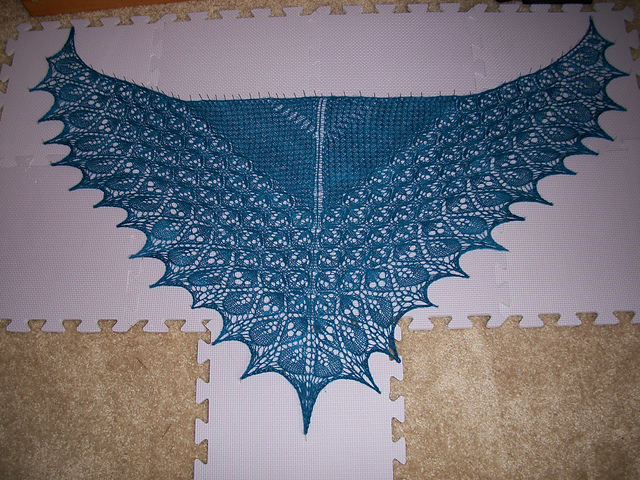 You remember my post about how difficult and complicated Estonian lace is and how important lifelines are? If I didn't know better, I would guess that Arty must have read it because my beautiful Laminaria now looks like this: 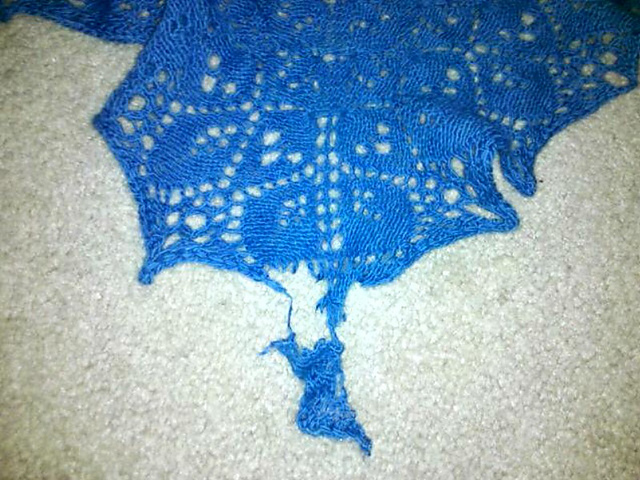 That stupid cat ate ALL three corners at least 12 rows in.  I looked and I really don't think there is any way to fix it--if I pull back that far, there is a very good chance that the whole thing will unravel.  I almost wish he had done this when it was still a WIP, when I still had lifelines in.  Now, the lace makes it next to impossible to throw a lifeline in.  Completely ruined.  Sigh.

Moral of the story: no matter how well behaved your cats are, your knits are still in danger.  Lock them up!

Happy(er) ending: Feeling a little down on Monday (Valentine's Day is not my favorite), I went to my LYS on my lunch break and bought myself a replacement skein of malabrigo lace "from Arty."  He owed me another one, right?  I will still have to put the effort into another shawlette, but that's half the fun anyway.  It probably won't be another Laminaria, but hopefully it will come out just as beautiful.

Next time: Sneak preview of my blankie-in-progress for Vicki's little girl-in-progress

Here they are, the last of the Gloves-for-All-My-Coats Project, the Entangled Gloves: 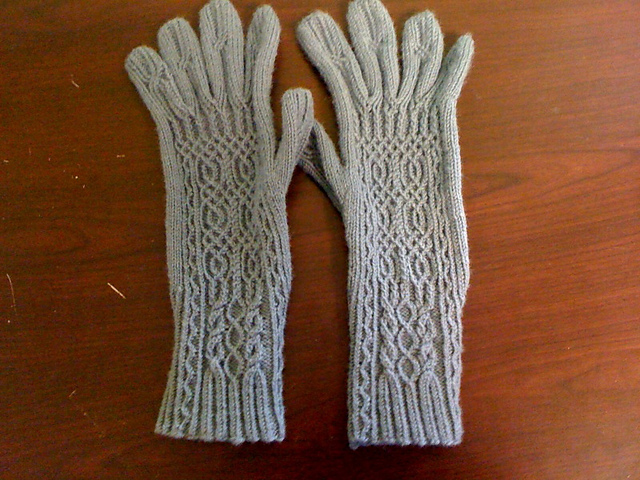 These were the most difficult by far.  Ringwood and Herringbone didn't even come close.  Just look at all that crazy cabling!  Julia Mueller must be some kind of genius to write a pattern like that!

From start to finish, these bad boys took me about a month, which, for me, is a really long time.  Granted, I had a bunch of other projects going, but this was still a very labor intensive project.  I draw your attention once more to the crazy cabling.

I only made one change to the pattern.  With a gorgeous pattern like this one, there really wasn't a lot too change.  How can you improve  upon perfection?  Well, my change was more of a rebellion than a modification.  In the introduction, Julia extols on the merits of knitting with magic loop and how these gloves would be sooo much easier if you knit them her way.  To me it seemed like she was trying to convert me to the cult of the "magic" loop.

I refused.  She might know how to design cables, but she can't tell me how to knit.  I didn't need her circular needle sorcery!  I took it as a challenge and knit the whole project on dpn's just to prove that I could.  So there.

Okay, so maybe I'm just too lazy to learn how to magic loop, but dang it, I am a whiz on the dpn's!  At least I was when I remembered how to cable without a cable needle--easy and not nearly as scary as you might think it is.

Anyway, the end result of my rebellion is lovely: 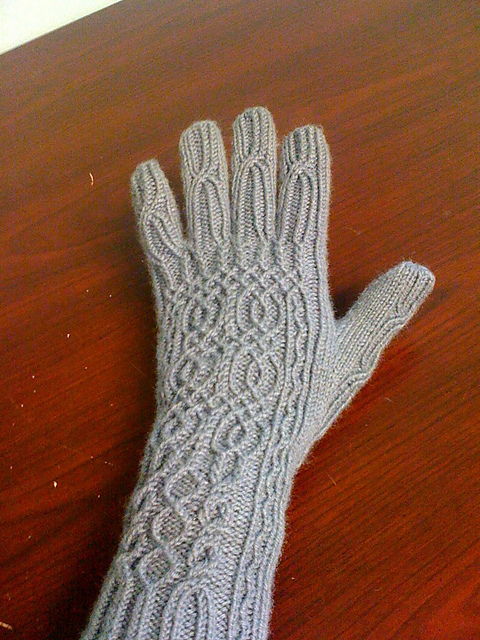 You may recognize the yarn, too.  I used the leftover Knit Picks Gloss in Dolphin from the Pas de Valse cardigan.  I looove that cardigan.   I wear it whenever I need a little pick-me-up.  Not only is it a gorgeous sweater, but the vain side of me still loves revealing my handiwork:

"Thanks!  I made it myself." *Gloating Smirk*

Call me proud, call me vain, my little ego never tires of it.  I anticipate wearing these gloves a lot, too, not only because they're warm and soft, but because I can then waggle them under the noses of friends, family, bank tellers, grocery store clerks...  If that makes me a bad person, then so be it.

Next Time: a sneak peak at my blanket-in-progress for Vicki's little girl on the way.