Never Knit Your Man a Sweater*

Naw, I'm just kidding.  I really couldn't be more pleased with this project.  If you know my hubby, you know he's not really a sweater wearing kind of a guy.  He likes jeans and flannel shirts.  I'd offered to make him sweaters in the past and he'd always turned me down.

Unfortunately, his accounting firm tends to pinch pennies on the heating bill and the poor thing is left shivering at his desk.  Since they have a dress code, my darling husband needed a sweater: 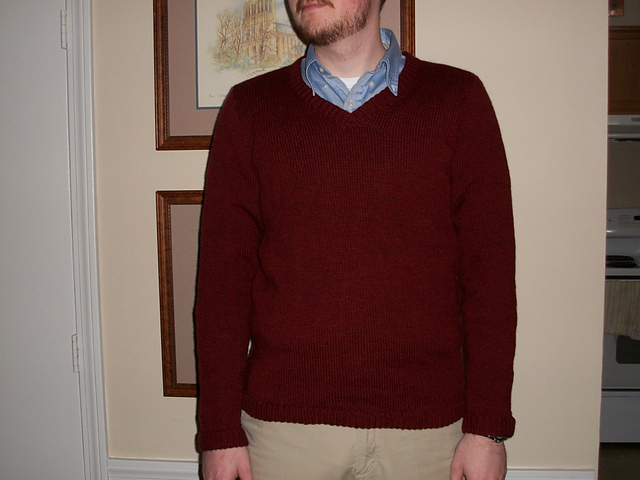 It looks a little lumpy in this picture, but that's because he'd been wearing that button-down shirt all day and it didn't want to lie flat.  But look at where the seams hit--just perfect!  The collar lies flat, the sleeves are just long enough, the armholes are big enough.  SO happy.
I think DH likes it, too.  After all, he did pick out the pattern--the most boring pattern he possibly could have. 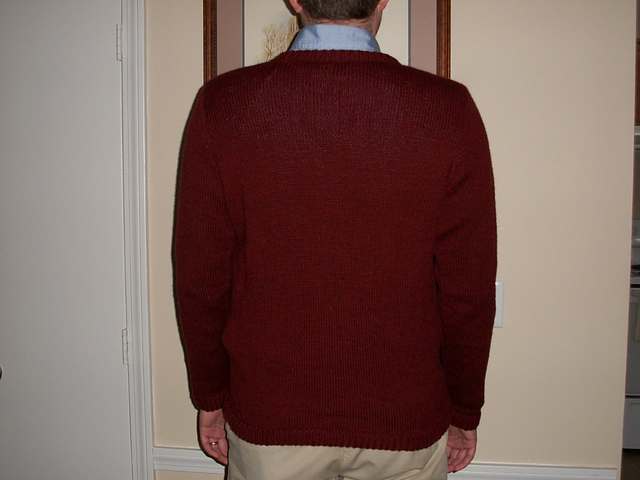 If you clicked my link above, you'll note that the Drops pattern he picked has a seed stitch yoke.  He didn't want that either.  He wanted the whole darn thing to be stockinette.  For a guy with only a few opinions, he sure has some strong ones.

I will say this, though, if he'd picked any of the patterns I'd shown him, I would probably still be working on it and no one else would be getting a knitted Christmas present this year.  And I've got a few doozy requests this year.  I'm going to need to learn to knit in my sleep to get them all done!

For those of you who know us both--or heard the story of the green vest--you would think that I picked the yarn out, too.  Nope.  Hubby decided he has enough green and blue sweaters and really wanted a dark red one.  I showed him picture after picture of yarn colorways and none of them were dark enough until we found KP's Swish DK in Garnet Heather.  He does look dashing in that color, doesn't he?

I think this might be my favorite Christmas gift this year.  One down...lots more to go.

Hope you all had a lovely Thanksgiving and good luck with all your Christmas endeavors!

P.S. Bad Cat news: crazy, list-oriented person that I am, I've already got our tree up and most of the house already decorated.  (You're jealous.  Admit it.)  Not 5 minutes later, Arty decided to "help" me put up decorations by climbing as far up the tree as he could.  He always likes to "help" me with whatever I'm doing (sweeping the kitchen, folding laundry, etc), but this one landed him a fat squirt of water in the face.  I've only seen him up there once more since then, but here's hoping our resident naughty kitty doesn't knock it over and destroy all my pretty ornaments!
1 comments

I know it's not Thanksgiving yet, but Christmas knitting is already in full swing.  You have to start early if you want to get any sleep during the holiday season--and if you want to finish something pretty for yourself!

I started this little number back in September, but then we had a crazy busy October, as stated above, I had to get going on my holiday knitting!  I'm already about 65% of the way done with Hubby's sweater, but have lots more to go.  At least I can cross this one off my list: 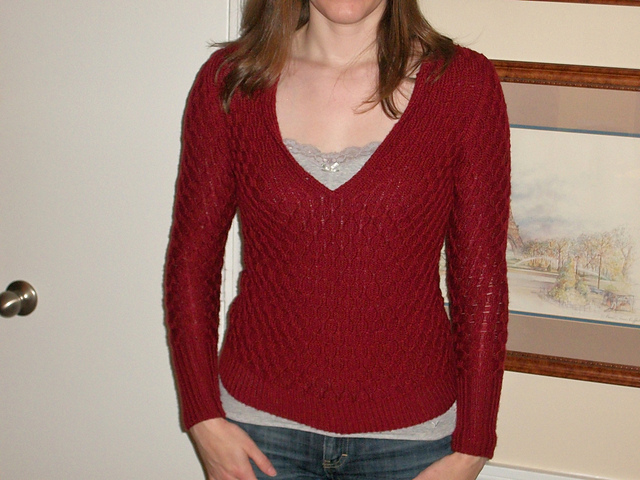 The pattern is Lowry by Avril Lang and was featured in Knit Scene Fall 2011.  I would highly recommend that issue--there were a ton of great projects I want to knit in the future, projects for every skill set!

Part of what took so long with this sweater was the allover honeycomb cable pattern.  It's a little hard to see in this picture, but there is a gorgeous hourglass pattern throughout the piece.  The cable pattern is also super stretchy and you knit this sweater with about 10-12" of negative ease (pick a size about 10" smaller than your usual size so it stretches).  Don't be nervous, it'll hug your curves beautifully! 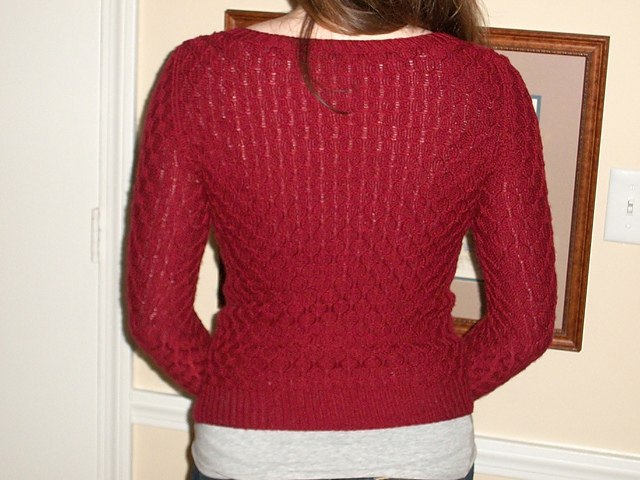 Unfortunately, the same principle didn't seem to apply to the sleeves.  They came out SO tight!  You can see the stretching in the first picture.  It's a little bit uncomfortable.  I know the yarn I used will stretch a little (Knit Picks Stroll Sport), but even so, I'm considering taking the sleeves off and knitting them again--once I get a little further into my holiday knitting, of course!

If you plan on trying this sweater, knit the sleeves a size or two bigger than the rest of the sweater.  The sleeve sizes in this pattern run a little small, even if you don't have the forarms of a Disney prince!

For next time, depending on how productive I am, I might have a sweater to show you or I might have a little knit ornament to show you!  (Pray for a sweater.  I'm getting a little tired of the miles and miles of stockinette in the sweater pattern Hubby picked!)

PS: If you're not on Pinterest already, what are you waiting for??  I added a little button to the sidebar that links to my pinboards.  Need an invite?  Let me know!
0 comments