Now I know that everyone but Maine has been whalloped by snow in the last few weeks, but all that snow passed right by us and all we got was rain and power outages (well, not in our house, thank goodness). So just as we were hoping we might have been let off the hook this winter, we get a lovely weekend full of "wintery mix," which pretty much means "gross" and "stay inside."

And, wise person that I am, I am heeding the "stay inside" and working on the tangled yoke cardigan this weekend. I'm getting really close to done with it. All that's left are the button bands and I'll probably have to block it. I am really loving the way it's turning out so far. The cable looks great and the yarn is really soft. I'm using Knit Picks City Tweed DK, which is merino, alpaca, and donegal. It looks really tweedy and "rustic," but I can tell it'll feel nice against the skin. The only thing I don't like is that there are a few too many slubs spun into the yarn. I kind of wish they'd let the color speak more for itself. I'm really excited to have this sweater finished and ready to wear!

I still haven't taken pictures of the Baroness Beret in action. I am just lazy that way. Soon! I also have not made any Etsy progress. Last weekend I accidentally made a second right-handed mitten that should have been left-handed and I haven't been able to make myself try again, so that's been on hold, probably until I finish the tangled yoke cardigan...depends on how I feel later tonight.

I don't know what my next project might be. I have a few in my queue, but don't know quite where to begin. I have a gorgeous pink angora yarn that's begging to be knit into Arisaig, some alpaca that wants to be the Prairie Rose Shawl from Knitter's Book of Yarn, I could try to do Venezia, take II, or I could go for the Ivy League Vest instead (don't worry, they'll all get done eventually. I just don't know where to go next). Any thoughts?
0 comments

I had extremely high hopes for this pattern and confess that I am a tad disappointed. Not that there was anything wrong with the pattern itself, I just don't think I will be wearing the finished product very often. 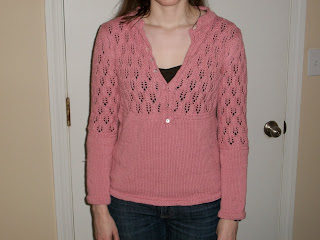 The pattern itself was not as difficult as it looks, I promise. If you understand the basic properties of lace and you can count, you can do this pattern. The hardest part was adjusting the number of yarnovers to suit the armhole decreases and really, that just required a little concentration, not rocket science. If I'd done a couple of things differently, this would be a really great sweater. 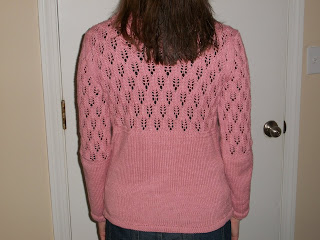 I think my biggest problem is that I knit it in a size too big. I don't like sweaters that hang off me like this one does, but after the Venezia fiasco, I am a little shy about knitting smaller sizes. What I should have done is modified the pattern myself and knit something between the two smallest sizes, but I was so excited to get started on the pattern right away. 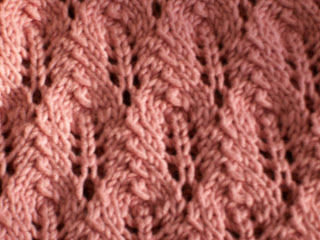 The lace came out pretty, though, didn't it?

My other problem was my choice of yarn. Although I really like the pink color, bamboo yarn sure is soft and lustrous and I had naively thought it was better for the environment than synthetic materials. Unfortunately, it's manufactured in the same way as rayon and has about the same amount of memory. From what I understand, it's soft and shiny, but doesn't hold its shape well, sagging over time--not the best option for a sweater. So in addition to knitting in a too-large size, the yarn is bound to sag. What I should have done is chosen the yarn suggested in the pattern, or at least one similar to it and been more careful about the size I chose to knit. Lesson learned.

Next post will feature the Baroness Beret, once I have a picture of me wearing it, that is.

Etsy news: I now have 5.5 products finished and once I have 8, I'll start working on setting up a storefron. Once I have 10, I'll put them up for sale. Good progress, I think!