I'm sorry this post is so late this week, but a lot has been going on, like my first AND second sales!! Okay, the second was to my mom, but the first was to a total stranger! And I even got a request for a custom item this past weekend, so I am officially in business!

If you haven't noticed yet, I finished listing the rest of my inventory, both baby and adult accessories. I also made a few more baby sets this past weekend. This strawberry one is my favorite: 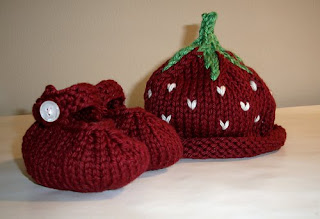 Too cute. I made them in KnitPicks Shine Worsted, so they knit up really fast, are 100% washable, and really, really soft. I just love the mary jane booties, don't you? I have 2 other sets up there in the same material. Check them out!

I also made a facebook fan page for the shop this week, so if you're not a fan, the link is in my sidebar. Become a fan and suggest the page to your friends! Please help me get the word out.

Enough about Etsy, though. I have found the time to knit for my family and me, too. Apparently, I have little to no self control when it comes to yarn. I had nothing to do one lunch break, so I thought I would check out a yarn shop I'd not yet visited. I told myself I would just browse, but I walked out with two hanks of Shibuiknits Sock yarn in the perfect peachy pink and superwash merino. I used Mother's Day as an excuse, but we all know that's a big lie...

Anyway, I did knit some lovely slipper-socks for Mom. She has been working too hard lately and needs to find a little time to relax on her own, so these socks are strictly for relaxation time. 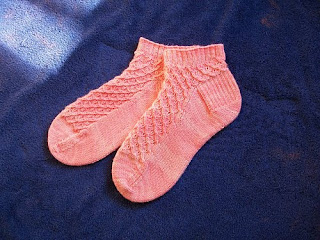 I used the pattern Voronetz Socks by Tia O'Connor and while they came out nicely, the constant cabling was a bit of a pain in the butt. Socks aren't really my favorite thing to knit, so I don't know why I picked such a labor-intensive pattern. Silly me. At least there is a lot of love in these socks--Happy Mother's Day Mom!

While I've been waiting for the yarn for a couple of custom orders, I've been doing a little knitting for myself, too. I made a lot of headway on the Swallowtail Shawl, so next week I hope to show you some before/after pictures of the magic of blocking!

Here's a shot of Branwen being a kitty parrot to end this post: 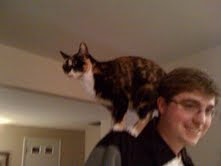 Enjoy the rest of your week!

I'm officially open for business now! My username is the same as on here or the shop link is www.etsy.com/shop/reinedumonde

I don't have a lot of things listed right now because I just didn't have time last night, but rest assured, there are a number of other items all photographed and ready to go. I just got so excited I couldn't wait to tell you about it! Look for more items in the next couple of days.

I focused on listing baby items last night because they were the impetus for getting the shop up and running. They are also my newest finished objects, especially the fruit baby sets. I've got some more cotton for a strawberry set and another flower set, so look for those soon!

Because I spent most of this week finishing up items for sale and cleaning up the shop's appearance, I don't have any new pictures for you this week. You'll have to go check them out at the shop ;). Once I finish this new baby line, though, I'm going to focus on a new project for myself, the Swallowtail Shawl, which has become very popular on Ravelry. It doesn't require much yardage, so I'm going to treat myself to the leftover alpaca cloud lace from Mom's Christmas project. After that, who knows? I might dig into another Eunny Jang, either the Autumn Rose or take another crack at Venezia. I swatched the former this weekend and can already tell it's going to look good...

Anyway, check out the shop and let me know what you think! I'd love to hear any thoughts or suggestions you might have (except for "more items." I'm working on that one).

It's here! It's done! My first *successful* steek project, yay! 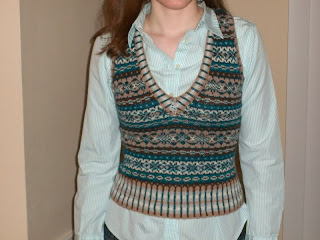 It fits great, too. The pattern I used is called Ivy League and was written by Eunny Jang. I just love her--she has the greatest patterns. In fact, three of the projects in my queue were written by her: Venezia, entrelac socks, and the Autumn Rose pullover. I guess she is my knitting role model *sigh* 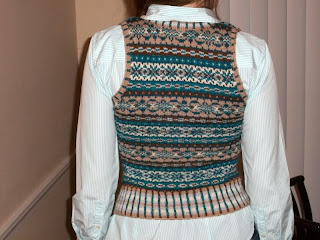 Anyway, I knit it on size 4 needles and used Knit Picks Palette for most of the vest. The dark green is Berroco Alpaca Fine from an earlier project that I frogged because I just don't ever wear it. Although it doesn't feel very soft when you first touch it, Palette knits up so well, especially in fair isle projects. It's soft and it clings to itself just enough to make it a great choice for steeking. Love it. 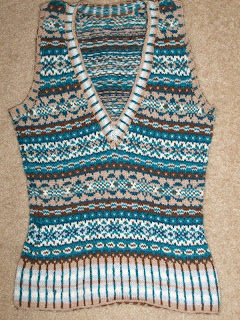 For once, I didn't make any modifications to the pattern. It was just that perfect. I have nothing at all to complain about this project. Really. It was definitely the hardest thing I've ever completed, what with fair isle shaping and steeks, but it came out great and the instructions explained it all so well. Great project and I'm really looking forward to knitting the rest of Eunny's oeuvre in my queue.

Etsy news: Get excited! It's coming really soon. I now have 9 finished items for sale and have been noodling around with writing welcome messages, policies, etc. Mom gave me a deadline of May 1st since she'll be attending a baby shower then and so it needs to be up and have a bunch of baby things in it by that time.

I have a great idea for a baby hat for project no. 10 and then all that's left is making some graphics to make the site look *professional.* Charlotte has volunteered to help me with the graphics so I'll have to make her a little something special as a thank-you once the place is up and running. After talking about it for so long, it's almost here! I'm almost giddy with excitement :)

It has recently come to my attention that I have roughly 6 miles of yarn. Before you get excited, about a third of that is super fine lace yarn and the rest is almost-as-fine sock weight yarn. Yes, it's a lot, but it doesn't take up nearly as much a space as I know you're imagining it does!

Still, that number is a tad staggering, so I've been making some stash-busting efforts, killing some leftover half-skeins and the like. My first find was a little ball of Karabella Aurora 4 that I used to make Walker's mother some gloves for Christmas. I hardly ever use sport-weight yarn and while I am hoping to eventually make a sport-weight argyle vest, this is neither a fiber nor a color I intend to include. I've got some Knit Picks Telemark for that.
So what else could I do with it? It's not enough to make anything practical. Instead, the kitties have a new toy elephant: 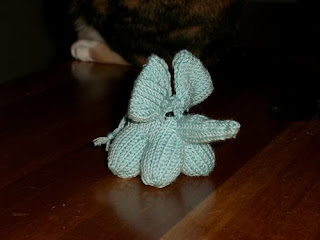 I found the pattern on Ravelry and it's by Christine Landry. It was super easy and only took a couple of hours. I since sprayed it with catnip and Little Kitty has been enjoying it quite a lot. You can see her foot in the background, waiting to strike!

My next destash effort was to get through the pile of DK yarn I also have lying around. It's all either merino or alpaca, so I thought it would make a wonderful addition to my growing Etsy pile. Here it is, your first Etsy sneak peek, the Antique Leaves Hat: 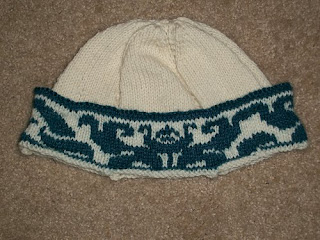 I used Knit Picks Bare superwash merino for the white and their DK Elegance, an alpaca/silk blend, for the green. So lovely though the yarn is, machine washing is not advisable.

The leaves pattern is from an antique German pattern book that's been scanned and posted to the internet. Now, I don't read a lick of German, but the patterns are absolutely beautiful. My next Etsy project, the Antique Star Beret, is inspired by the same book. I was unable to complete the whole leaves pattern due to the amount of green in my stockpile and that I didn't want to make the folded flap any taller, but I think it reached a good stopping point. Here is a closeup of the pattern. 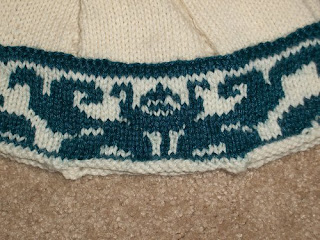 The top portion of the hat is just straight stockinette with some eyelet columns running up the sides. You can't see them in this picture, but later I'll model it for the shop and you'll see them more clearly then. I'm not as pleased with the way it folds. I pressed the heck out of it, but you can still see some of the eyelets poking out at the bottom. It looks much better on someone's head, but all the same, I am a wee bit disappointed. Here's hoping the next in the Antique series comes out better.

Now that I have 7-8 products ready to go, I am going to start working on cleaning, photographing, and prepping them for sale. I am also going to be working on prettifying the site with welcome messages, shipping instructions, and the like. The thing I am most stuck on is a name. Do any of you have any good suggestions? I don't think "Bad Cats, Good Knits" is going to cut it. I would appreciate any input you might have! If all goes well, I should have it up and running very soon.
0 comments