Okay, so I still haven't passed these along to their intended recipients, but everyone's been super busy, so I haven't had a chance to see them since about March.  I will finally put the things in the mail this week, though.  I promise.

For Terry, The Nemesis Socks: 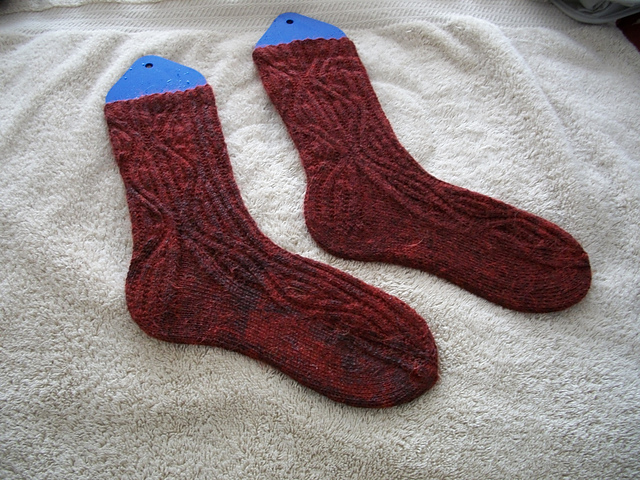 The pattern is by Susan Dittrich and was featured in Knitty Deep Fall 2010.  You can also download it for free on Ravelry.  I really enjoyed this pattern!  I started out rather ambitious and tried Eunny Jang's Bayerische Socks, but they're out of my league.  Size 0 needles and ~a million tiny cables.  I probably *could* have knit them, but they were extremely difficult and required more effort than I wanted to put into this project.  Sorry, Terry, but I wasn't looking to create masterpiece socks here.
Nemesis, however, was quite fun.  If you can read charts and you can knit and purl, you can knit these socks.  The hardest part was paying close attention to the chart and remembering my place.  A row counter definitely came in handy here.  It's a long chart, too, so I never got bored knitting it.  I might knit another pair of these for myself later!
The yarn, however, I did not enjoy as much.  It's Berroco Ultra Alpaca Fina, which I have used in the past to great effect, but found frustrating this time.  It was splitty, prone to tangling, and I had to use both wet and steam blocking--on socks!  The tangling was the worst part.  I had it wound all prettily into a yarn cake, but while I was pulling from the center, it collapsed into a knotted disaster that took an entire afternoon to untangle.  I will be steering clear in the future.
At least the color's pretty.  Hopefully Terry will like them.
For Jennifer, The Little Gems Mitts: 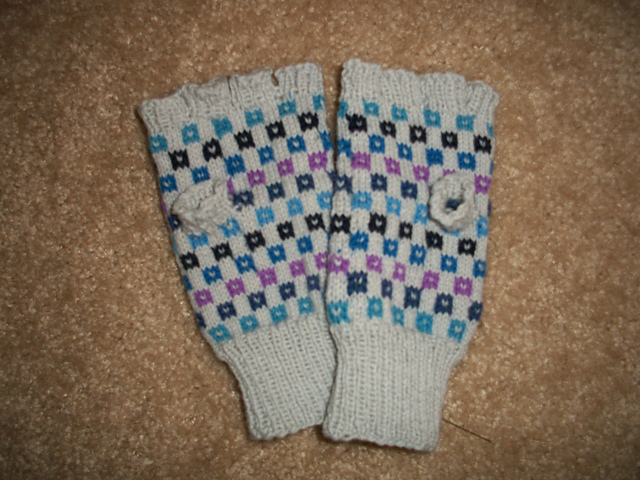 At first, I had no idea what to knit for her, but this came right after I finished that monster of a sweater, Venezia and I had a dozen leftover bits of Palette yarn--perfect for little mosaic mitts! (Yes, all the colors are Palette). The pattern is by Donna Kay and was featured in Interweave Knits Holiday Gifts 2007. 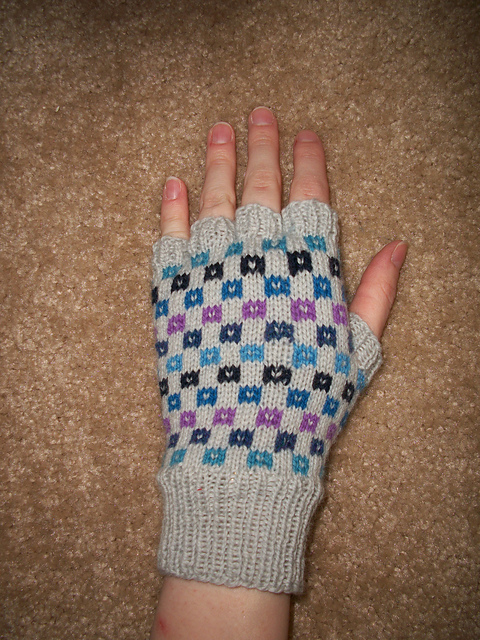 These were a little bit harder than the Nemesis socks, but after Venezia, they were a piece of cake.  They look like intarsia, but there's never more than two colors per row, so you can strand away.  And if you don't like the look/feel/process of knitting all the fingers separately, you could also make them true fingerless mitts and knit that all as one piece.
I probably would not knit these again.  They're pretty cute and good for using up some ends of yarn, but there were a lot of ends to weave in for such a little project and it didn't use up hardly any of my leftover colors, just the gray.  I suppose you could fix that by only using one or two accent colors, but then what's the point?  There are way cuter fair isle patterns out there for mitts.  Good to try new things and use some of the patterns that are already in my library, though.  I should do that more, considering I've got roughly 500 patterns at my immediate disposal...
I do like the effect of all those blues in the gray background, however.  I hope Jennifer likes them as well!  Too bad it's about 80 degrees right now and she won't need them until November.  Oh well!  That's just one of the pitfalls of knitting year-round.
Good news: I finished knitting the Aeolian Shawl!  I plan to block it out tonight and maybe, if you're really really nice to me, I'll post some pictures of it blocking...
Cheers,
-Allie